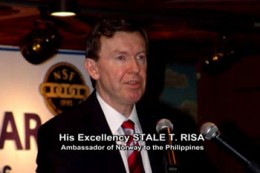 The 2nd Fil-Nor Maritime Seminar was held at the AMOSUP Convention Hall, Seamen’s Center, Intramuros, Manila. It was sponsored by the Norwegian Maritime Officers Association (NMOA), Norwegian Seafarers’ Union (NSU), Norwegian Union of Marine Engineers (NUME), Norwegian Shipowners’ Association (NSA) and the Associated Marine Officers’ and Seamen’s Union of the Philippines (AMOSUP) with Fil-Nor Gain, Inc. acting as Secretariat of the said important event. The theme of the seminar was “Training and Regulations for Filipino Seafarers on board Norwegian Owned / Controlled Vessels”. Guests of Honor were His Excellency, Ambassador Ståle T. Risa, former DOLE Secretary, Patricia Sto. Tomas and Secretary of DOLE and Keynote Speaker of the Maritime Seminar, Honorable Arturo Brion who was represented by his Undersecretary, Honorable Manuel G. Imson.

It was held in response to the growing need to discuss the changes in policies, and processes as well as the new economic structures that developed brought about by globalization that has affected the maritime industry and its activities. Emphasis was also given on the new regulations, additional training and education required by Filipino seafarers on board Norwegian owned and / or controlled vessels that are essential to ship safety and security and the protection of the environment. 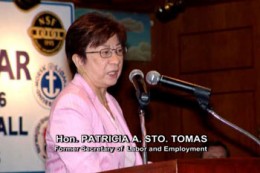 The seminar showcased the long existing bilateral relationship between the two countries, Norway and the Philippines, the latter, being a major supplier of seafarers for the Norwegian international fleet. A true partnership that grew through years of commitment in developing and improving the quality of Filipino seafarers and the industry they belong to.

Likewise, the two day event highlighted the importance of providing the seafarers with decent working and living conditions that will be beneficial to them and their families by giving them adequate wages and benefits, a safe and healthy working environment while serving on board Norwegian owned/controlled vessels by adopting similar Collective Bargaining Agreements, the NIS CBA for NIS flag vessels, which was introduced in the Philippines in 1987 and ten years after, the Model Agreement, for foreign flagged vessels that are owned or controlled by Norwegian companies. 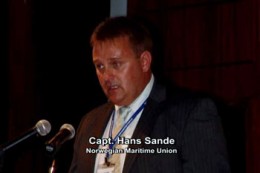 The Maritime Seminar was participated by top executives from manning agencies, shipowners and representatives, maritime schools and institutions, and government officials who exchanged views and their experiences on the issues and problems facing the maritime industry and in the end, finding new steps and solutions to these problems that would truly benefit the Filipino seafarers.

A Dinner Reception for all guests and participants was also hosted by the seminar organizers on the evening of October 11, 2007. The guests enjoyed the wonderful dinner while being entertained with music coming from the live band and guest performers.