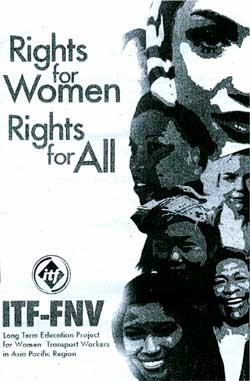 On November 24, 2007, a Gender Sensitization Seminar was held at the AMOSUP Convention Hall marking the United Nations Day for the Elimination of Violence against Women. The Seminar was sponsored by the ITF Philippines Women’s Coordinating Committee, composed of women members from AMOSUP, PLU-PSU, PNR, PWUP and PANTALAN. The seminar was aimed to expose Union members and employees to issues confronting women in the workplace.

A film entitled “North Country” was shown depicting the issues confronting women in the workplace like sexual harassment and discrimination. These issues happened in a working environment that was believed to be dominated by and intended for men only. The film reflects the gender issue that men are superior to women and that because of these superiority or power theories, men looked down on women even though the latter were able to do the work equally as men can.

It was followed by a highly informative and entertaining talk with open forum presented by Atty. Rowena Guanzon, a highly profiled lawyer who handled some of the celebrated cases involving women as victims. She talked about the “Issues of Women in the Workplace and Sexual Harassment” and cited the Anti-Sexual Harassment Law or RA 7877. The presentation tackled the significant issues behind RA 7877, giving various incidents and cases related to sexual harassment in the workplace. In her talk, she emphasized the importance for employers to adopt in its company rules and regulations, the procedures and proper decorum in dealing with cases of violence and sexual harassment in the workplace.