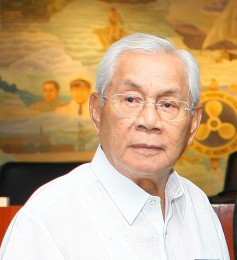 Capt. Gregorio S. Oca, who passed away on November 21, 2010 due to a lingering illness was  laid to rest at the Loyola Memorial Park in Marikina City after a 9:00 am mass at the AMOSUP Seamen’s Center at Intramuros, Manila  on November 28, 2010 which also marked his 84th birth anniversary.

Capt. Oca was the President of the Associated Marine Officers and Seamen’s Union of the Philippines (AMOSUP) which he founded 50 years ago on November 11, 1960 which aimed in uniting all Filipino seafarers. A seafarer first before he became a maritime union leader, this great man  labored the fight for the legal, social and moral rights of the Filipino seafarers in the domestic and international fronts.

He was a tireless leader who had the vision, endless passion and dedication in championing the welfare of the Filipino seafarers and workers worldwide.  His leadership in the maritime industry earned him great recognition and respect not only in the Philippines but also in the international maritime community.

To highlight his true commitment for the betterment of the seafarers, our organization, Fil-Nor GAIN, Inc. which was established by the Norwegian Maritime Unions in May 2003 together with Capt. Gregorio S. Oca, where he held official union representation,  is one among the many organization  he has actively supported and cooperated in along with his Norwegian partners in assisting and giving service to the Filipino seafarers working within the NIS registry.

A multi-awarded Master Mariner and maritime union leader, his works and contributions to the maritime industry even during his last days, undeniably showed his love, understanding, dreams, dedication and commitment  in improving the plight of the seafarers.

His passing  brought the government and entire maritime industry together to pay their last respects to the greatest seafarer, Capt. Oca.

A great loss to all of us, we will truly miss Capt. Gregorio S. Oca, a great man with a big heart.

May he rest in peace.